Do you ever feel imperfect?  Your abs are a keg, your hair is a cyclone, and your skin looks like a connect the dots? Trust, me, you aren’t alone.  Even those paid to be perfect are imperfect – the forced weight loss, cosmetic surgery, and botched liposuction are proof of this. Mickey Rourke is unrecognizable, Tara Reid’s stomach is from a horror movie, and even Kathy Ireland is now sporting a bonafide gut.

This is a flashback to that moment 8 years ago when I was the skinniest of my adult life, had perky boobs, silky hair and didn’t realize that the freckly girl I saw in the mirror may not actually be who still stared back…I want to say thank you to my old co-worker who got me drunk  and said, “are you blind, you are HOT”.

So for all those times you feel imperfect, remember you are unbelieveably, unremarkably not uniq 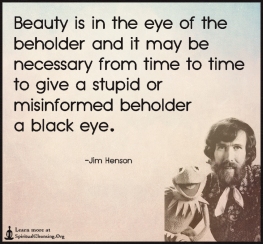 ue in this. You are far less unspecial then you make yourself out to be, in fact, you are just like everybody else. Maybe some hide it better, maybe some days are worse, but nobody is perfect…perfectly flawed perhaps.

Beauty is in the eye of the beholder, sometimes the beholder just isn’t you…and thank god for that.

“Am I faithful, am I strong, am I good enough to belong? In your reverie of a perfect girl?” – Sarah MacLachlan

When you were an eager little youngster, you watched all genres of movies and listened to countless songs without really understanding what it is you were listening for.  Most Disney movies have sexual inuendos, adult jokes and hidden plot lines that kids just don’t seem to get.  You think your family puts the FUN in DYSFUNCTION?  If you want to talk about family drama, well Snow White, Cinderella and Lion King are filled to the brim.  Children don’t stop to think about what is actually happening and what it means when your stepmother or brother tries to kill you – you know, brotherly love & murder very seldom mesh well.  Just my opinion, but hey.

What I’ve noticed more than ever is how many poems and songs I just didn’t understand.  We danced to the beat, we recited the poetry; we sang those nonsensical lyrics and didn’t have a damn idea why.  I mean, sure, we all don’t like Mondays, but it takes being an adult to truly grasp that reality.  And the first time you really listen, I mean REALLY listen to a song about suicide or rape as an adult, you suddenly realize this is no longer just a lyric or plot line, but something you have (in some degree) probably lived through.  Most of us by a certain age have either gone through some psychological issues or shouldered a friend (or seven) through depression.  It’s not funny, it’ not fun…it’s touching, it’s hard and the lyrics are most likely written by somebody who has actually gone through it too.

That got me thinking. All of those songs put out by angst-ridden female artists of the 1990’s, Natalie Imbruglia, Sarah Mclachlan, Jewel….they finally make sense.  All those dilemmas they had about love lost, starting over, being out of tears, staring at their eggs or aimlessly walking into movie theatres alone finally make sense.  You don’t do these things in your childhood, you don’t really do them in your teens, you don’t understand them in you 20’s, but by your 30’s you’ve finally lived and learned from similar scenarios.  You do realize dreams only last for so long, people can leave you torn and there is a chance you have gone down on someone in a movie theatre.  Graphic maybe…but, possible?

I don’t want to say being an adult is sadder; I just want to say that some of the farcical nonsense of those lyrics finally make sense.  Most songs and movies finally make sense.  Like when my girl Alanis Morisette said she had one hand in her pocket and the other giving a high five…I had no damn idea what the hell she was talking about.  The entire song just seemed like a list of opposites and non-rhyming words…a bit of a scattered attempt at songwriting in my opinion.  I didn’t get it back then, but now I do. It’s about being many things at once, trying to make it all fit together and finally understanding that you do everything a little half-assed…you are a little bit of many things, but you accept it.  You CAN be two exactly opposite things at the same time and funnily enough, be perfectly okay with it. Like my girl Alanis says, everything’s gonna be fine, fine, fine.